Why the little things matter

So March was an interesting month of highs and lows.

High - I got to go to Kentucky to help produce a  new pilot my production company is doing for DIY network. This is a big deal and we are very excited about a project that is turning out great!

Lows - being out of my fitness/nutrition routine. (And of-course dealing with being away from my family, especially my five year old, Ben.)

I was just getting into a groove of my training for my next half marathon. I was perfectly following my training program and feeling good - and then poof. Just like that. I'm all out of whack.

With very long days and no real place to run I was forced to put my running sneakers in a corner. They came out 3 times in two weeks for small little runs but those little runs mattered. My nutrition was challenged but I found ways to have a few decent meals. And it mattered.

The old me would've never bothered to do anything. I'm away after all. But striving to steal the time when I could run was important to me, even if it wasn't as often or as far as I would've liked.

The other little thing I made a priority was getting in the 30 day March "Hot In Your Tank Top Challenge" that I signed up for on Facebook. It was 10 - 15 mins. of strength training a day and there were many days that I wanted to blow it off. But it was only 3 reps of about 5 exercises and I wanted to not just give up. I wasn't eating on point and I was barely running. I needed something to keep me grounded and connected to health and this was it.

Each day I gave myself a little star for doing the workout and yesterday, the last day of the challenge was no exception! :) 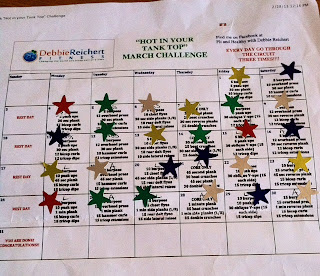 Even on the days I dreaded it, I always felt great after I did it. I didn't eat my greatest (but it could've been worse.) I still expected a tremendous weight gain upon getting home though because that's how my brain works. Luckily I'm only up about a pound so it's fine. But I do think it's some of the little things I did. - the little runs, the daily strength exercises and burpees, the days I chose a rice cake and peanut butter snack with a fruit instead of a bag of chips (though the chips won a time or two.)

These little things all added up to me being able to easily begin to slip back into routine and still feel OK with myself rather than feeling like "I blew it" and have to start all over again. I made a few mistakes but I think I learned a few things and next time I'll be a little more prepared for a similar type of trip.

What are some of the little things you do that matter?

By the way in case you're interested in the April challenge (which I'm doing) It's called the "Gorgeous Gams and Bangin' Booty challenge"and you can find it here. And here is her blog that actually demonstrates the moves!

The last two weeks have not been awesome in the world of running for me.

Right now I'm living the dream and in production in Kentucky on our first television pilot for network.  It's a big deal. After 3 years of working really hard my partners and I did it - we are getting a show on the air!

However, being away from the family, working 12+ hour days, 7 days a week, experiencing bad weather and having limited places to run has left my running pretty woeful. I managed to squeak in 1.25 miles two days ago during a little downtime and that helped to clear my mind but wasn't nearly enough. Besides not getting to really run the bigger challenge is being away from my family. I miss my son and hubby so much! They are making such a sacrifice for us but I do believe it will all pay off in the long run.

The other tough thing out here in rural KY is the food! It's not like there are Whole Foods to roll up on or even a nearby grocery store - 15 miles away for a little one - and not so shockingly no gluten-free or organic section ;) I found some rice cakes so I've been living on oatmeal, rice cakes, a little peanut butter, hard boiled eggs and potatoes. We are going to journey out to Walmart tonight after we quit for the day and hopefully replenish our fruit. We are trying. Local fare is mostly fried.

While I feel pretty bummed about the running I am proud of myself for making my "Hot in your tank top" March challenge a priority. It's only 4-5 strength training exercises for a set of 3 (about 10 - 15 mins of exercise total) but it's enough to get me sweating and though every night I want to sit down and have a glass of wine, I force myself to do this circuit first. I definitely feel happy about sticking to that commitment and if I didn't have that, there would be a good chance that I wouldn't be doing anything at all. :/ 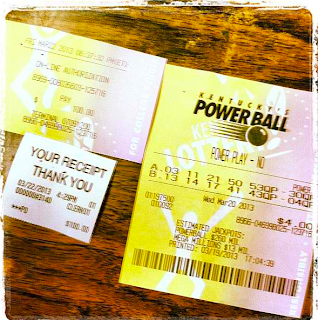 I go home sometime this week, looking forward to getting a few good runs in.

How are things with you? Do you do monthly fitness challenges to keep on track?

Aside from the fact that I avoid processed foods, I can't eat gluten or dairy so it's not like this stuff makes its way in my home often. I'll admit that every so often my son will sneak a box in the cart and he'll get a little for lunch, but that's not likely to happen again. I'll also admit that back in the day before I gave a damn about nutrition I thought this crap was pretty tasty.

There are two whole food blogs I like to read: Food Babe and 100 Days of Real Food. These blogs are great to read because they are very eye-opening and informative but they will also get you a bit crazy when you begin to read about our flawed food supply. They are food investigators so there are many things that might seem OK or even good for you that turns out to have something questionable or downright dangerous about it.

In any case, I try not to get myself too nuts about it all because somedays it all gets just too overwhelming.

Even when I was fat I wasn't naive enough to think that something like a Kraft Macaroni and Cheese was a healthy choice. I knew it was crappy, processed, comfort-like food that tasted good. What I didn't really realize at that time was that it contains ingredients (Yellow #5 and Yellow #6) that are known to cause cancer and hyper-activity in children and a host of other potential issues.

That would be crappy enough but what really makes my head explode is that they don't have to use those chemicals. In fact, Kraft makes a version for other countries which uses paprika and other non-chemicals to color the mac and cheese. In fact these chemicals in the US version are so harmful that they are banned in places like Norway and Australia and being phased out in the UK.

So Food Babe and Lisa from 100 Days of Real Food started THIS PETITION to urge Kraft to make our good 'ol US mac and cheese as safe as the rest of the world.  They even taste-tested it - and it tastes exactly the same. Who could be against safer food? Who wouldn't be on board to saying no to cancer-causing ingredients when alternatives are available? Isn't this a no-brainer? Isn't this one issue that we can all agree on?

Well… this story was picked up by Shine Yahoo yesterday and to my complete shock some of the comments were dumbfounding. People raged, "just don't eat it, then. Why ban it?" "I defend the right for people to shove any kind of food down their mouths…" etc… I was shocked.  I agree that consumers have a responsibility to make their own healthy choices. DON'T EAT IT. I agree - no f'ing duh, MAKE A HEALTHY version yourself but I couldn't understand how people were so against the idea that we would hold companies accountable for making our foods safer when possible.

Here were some of the comments: 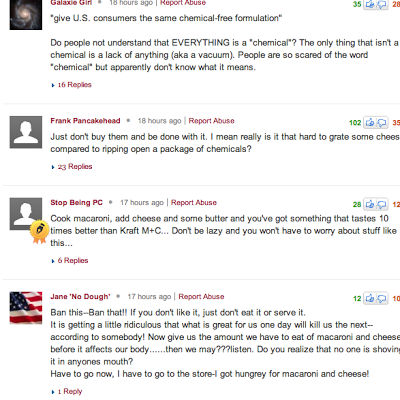 It's just scary to me how every issue, even one like sending a message to not put potentially hazardous stuff in our food when there's an alternative, still has people fighting against it. Why?

By the way - Kraft isn't the only one. There are tons of other processed foods on the market that are using chemicals that are banned in other countries in our versions. It's maddening that there are better alternatives but so many of us are just content to accept this when we don't have to.

What are your thoughts? 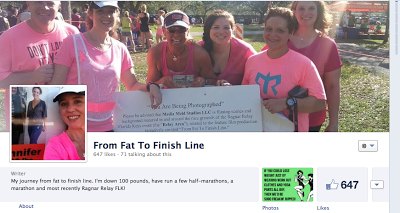 I love Social Media. I admit it I have an obsession, addiction, appreciation for Facebook and Twitter.

Social Media has played a HUGE role in my running success. In fact I can easily say that I would be a whole different person with a whole different set of friends right now if the computer and all of its offerings weren't at my fingertips during this journey.

When I first started running I used this blog and Facebook to help keep me accountable. In those early days, the support and Facebook "likes" really motivated me to keep going.

I also found that the minute I started posting about my running - running friends came out of the woodwork to offer sneaker shopping recommendations, ideas about where to run in my town, training programs and so much more.

Looking back on the last three years I use social media DAILY to keep me motivated, to gather information, and yes - even (especially) to brag. For better or worse, many a long run was fueled by knowing that I was going to get to show off (just a bit) about that run!

Yes, Facebook, Twitter and this blog has been crucial to my success. I'm not sure where I would be without it.

Consider this - Thanks to social media:


And so much more.

Who doesn't get a little pick-me-up when a inspirational running quote scrolls past you on your feed?

I can't count how many times I've posted or tweeted running-related questions about countless things: Nutrition, foam rolling, pantsing my poop, suggested play lists, hydration systems, races, etc to get varied answers and feedback from runners across the globe. It's amazing.

I honestly don't know if I would've stayed on this path if it weren't for social media, this blog and the wonders that come from my computer. I have to give it a lot of credit.

It also warms me to say that thanks to my own Facebook sharing, I've inspired a few others to get out there and give running a shot - it's a wonderful thing.

What about you? Do you think that Facebook, twitter, the computer age has helped your fitness / running?