Read part one of my race recap (The Swim) here.
So I get out of my wet suit, shake off the cramping as best I can and find my bike. The good news is it seems everyone had left before me so my bike was very easy to find and I had all the space in the world! (See there is an upside to being a back of the packer.) If you look behind me you can see Angela squatting down and getting herself ready for the bike as well.

I'm not an awesome biker. I was lent a Canondale at the beginning of Tri season. A pretty nice one in fact. I even put some money into it - getting it fit, upgrading the tires, even adding something with the rings to help climb easier... But I could never get used to the bike. The clip less pedals continued to freak me out. I just couldn't get out of them and the fit isn't quite right. They brought the seat up as high as they could for leg length but the handlebars feel way too far away. I can barely reach the breaks. It just feels awkward - there's one last thing to try with the handlebars but I might have to let it go, get to a bike shop and get one that fits.

Anyway, since comfort on the bike never happened, I never got around to riding a bike outside this summer. So the last time I rode a bike was last September at my sprint tri. And that was an 8.25 mile bike. I did a few sporadic spin classes so that had to suffice as my bike training.

So for my first ever 25 mile bike ride I would be using a hybrid with regular pedals. (And I was very happy to have it! This too is a borrowed bike from my friend Roxi - she was supposed to get it back already but with all the traveling this summer never got it to her. Which was lucky for me.)

A side note: I was pretty much the only person in the whole race with a hybrid. Everyone else had a road or tri bike. I couldn't even fit the tire in the little narrow groove they provide to rack your bike. No problem, I just deployed the fancy kick stand! ;) lol... 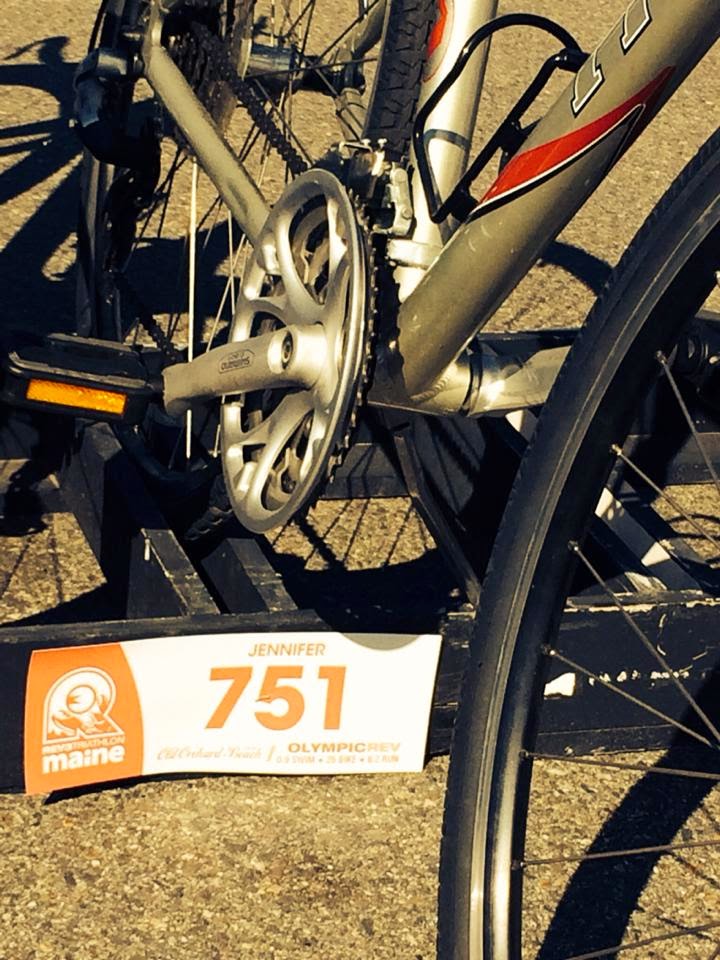 Anyway, I was silently sweating a little bit because I didn't know what to expect. I never really rode more than ten miles or so and that was a year ago - plus everyone said it might be tougher for me on a heavier hybrid and without the benefit of the clip-in pedals.

But off we go. 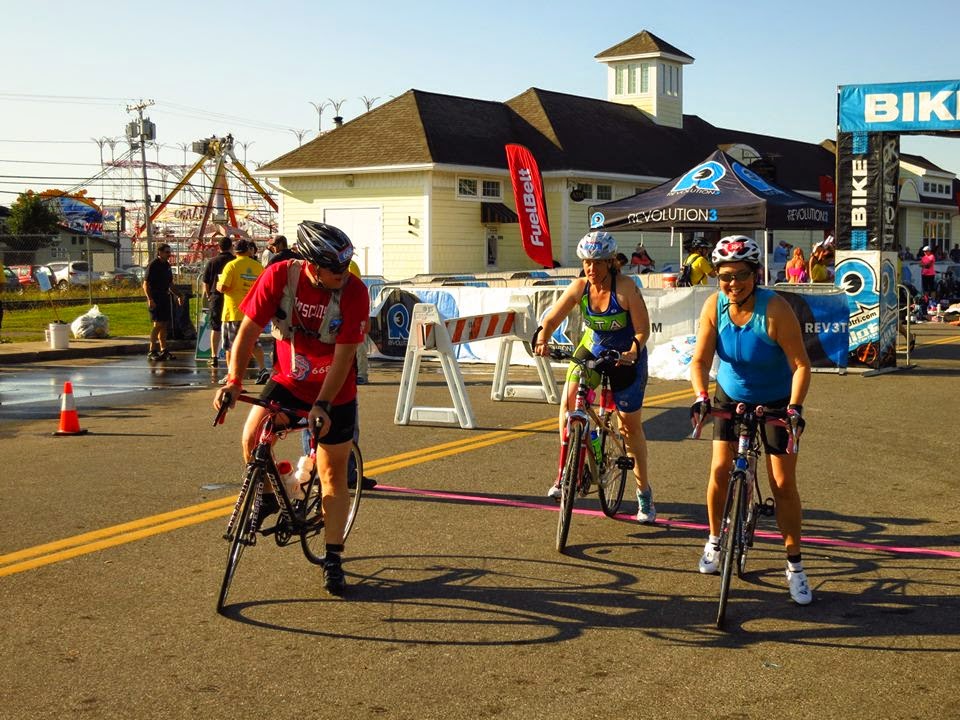 The course was beautiful. There were a few challenging hills but nothing horrible. I enjoyed the bike and just had a few dumb little issues like having a tough time getting my water bottle out... Well I finally got it out but couldn't get it back in so I stuck it in the back pocket of my kit. I also had a few cramps happen during the ride in my feet and whatever the muscle is under the shins. I'm just a cramper. But they would subside and it wasn't anything that stopped me in my tracks.

The other triathletes were awesome out there. Very friendly, many waving and rooting us on. I love this about REV3 it's just such a friendly vibe. If I ever (hardy-har-har-har) were going to do a 70 or 140 I think I would want it to be a REV3 race.

So 25 miles come and go and I know I'm almost home free! I didn't drown or crash - my two fears. Only 6 little miles stood between us and the finish line.

Read the last part of the race report - the run HERE

I am very happy and proud of myself.

I am up more than I'd like to be in weight.

I haven't been able to train (like I would of liked to) but have kept consistent in doing something.

It's been a tough summer of lots of work and dealing with my autistic son.

AND... I competed in and accomplished my first OLY Triathlon.

AND... I came in close to last place.

So much of my accomplishing this was in the exercise I've kept up on (even if it wasn't close to full-on training) and so much of it was because I went into it believing and willing myself to make it happen.   Which if you know me and the negative voices that reside in my head is a big fricken deal.

Much of it was also having good friends (thank you Scott and Angela) by my side - no doubt. They stuck with me through the swim, bike and run and that was AWESOME.

So here goes the report:

I was undertrained and a bit nervous but because of being not trained it was the most relaxed I'd ever been going into a race. I really took the attitude of "nothing to lose." The pressure was off. If I finished it, good for me. If I didn't, I had valid reasons. But I was determined to get to the finish line.

Side note: I am in a tri club called RTA. They are pretty hard core. Many of them place in their AG and I was feeling bad about representing them knowing that I would be a back of packer... Maine is a team race and I was invited to the team dinner. They made me feel welcomed and I was so proud and happy to wear that kit.

So the night before, I put out my clothes and tatted myself up. Shit was about to get real. 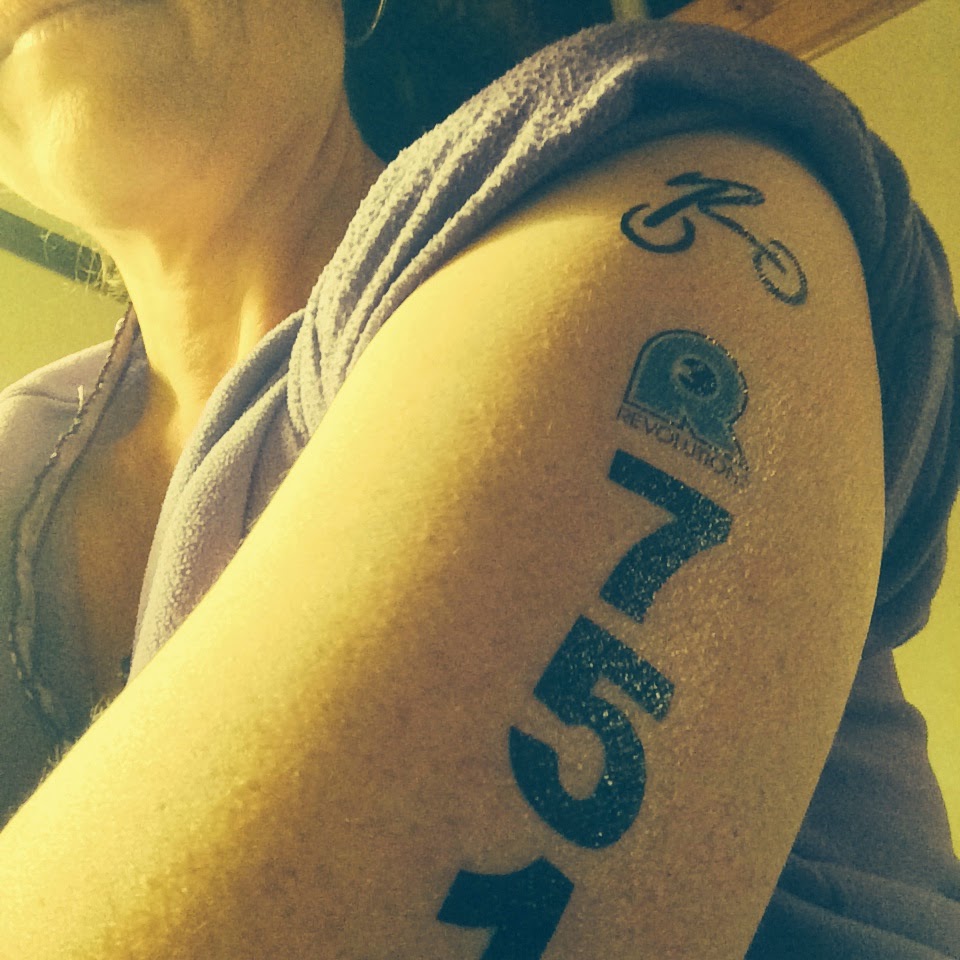 I head to transition, set up my crap, then head to the ocean. I go into the water and as I'm coming out of my warm up I realize that my wave is already in the queue and ready to swim! Shit. So I hustle on into the group and find my friends Angela and Scott. Scott actually took a green athena cap just so he could do this thing with me and Angela. They are awesome.

So we get to swimming. Wow. This is hard. The current was decent and my lack of training was in full-effect. I'd swim, swim, swim and  the buoys still seemed a million miles away. Holy crap. Can I make it? Angela or Scott would call out, "Already a fourth of the way there!" And I would think, "Oh man, that's it? I'll never get there." But we just kept swimming.

My rock star friends kept me going though. "Let's just do 20 strokes and then take a rest!" Scott would call out, "Looking strong, Jen" and Angela would say, "I'm keeping on your right to make sure you don't go too far out to sea in the wrong direction!" When things were looking grim they'd make a joke - the friendship and support just overwhelming. I wish everyone had this type of love and support during a tough race!

And when we were swimming I would fight the negative voices in my head by silently repeating mantras of being strong and capable. I kept focused on the fact that my body could accomplish it I just had faith in myself.

Of course during the final push of the swim my legs started to cramp. No surprise as this happened during my (trained for) sprint last year. Awesomely painful charley horse/calf cramps in both legs. This worried me. What if they didn't uncramp? I was terrified of the pain. Terrified that this could undo me.

A little bit from shore the water became shallow enough to walk and with the help of my friends I was able to get my heels to the floor of the ocean and walk in. My legs hurt from the cramping but the pain began to subside enough. I was going to be OK.


So my time was like 50 minutes in the water for .9 of a mile. This might be absurd for some athletes but for me who has had 20 minutes of total swim training this entire summer - I'll take it. I made it out of the water and on to the bike.

Now on to a 25 mile bike ride. Did I mention that the most I've biked was 8 miles last September? (I have since taken a few spin classes but no outside bike riding since!) or that I'd be doing these 25 miles on a hybrid bike with regular pedals? Yep.  Stay tuned.

This will be my year

Today is my birthday. 42 years old. A fresh new year ahead of me.

I went to the gym and ran. I was perhaps slower than I was a year ago.

I was definitely in a bigger sized pair of pants and moving more weight than a year ago.

All that matters is right f'ing now.

I felt great. And it was during that slow-ish 3 mile run that I decided that this was going to be my year.

No more crying about a few gained pounds.  No more lamenting about having no time. No more excuses. This year will be my year.