New bike for triathlon and other stuff

So while my working out has been woeful of late I'm trying to make up for that by signing up for races and buying shit.

I'm hoping that buying the right stuff and gearing will set my training up for the best Tri and race season ever :)

Exciting Tri stuff/news #1 - I've signed up for another race

It's REV3 Maine the Olympic distance which is 0.9 swim / 25 mile bike and 6.2 run. It will be my first OLY distance and I'm really excited to make Maine the one. I've spectated this event twice in a row - both times I was there filming the From Fat To Finish Line documentary. Finally I'll not be just watching or holding a camera - I will be crossing the finish line!

OK, it's not exactly new or shiny but she's a beauty. She's a road bike that belonged to my Mom in Motion coach Dana and she's lent her out no less than 3 or 4 times during the course of the last few years. So new "Tri-ers" before me have ridden her to victory and the baton has been handed to me. She's in need of a tune-up and a fitting for me but I'm excited to be making the move from a hybrid to a road bike this season!

And before you get too excited over those cages...

If ya gonna do it, ya gotta do it right so I invested in these shoes and pedals. Both together cost $75 new off Amazon. The reviews were pretty good for such an inexpensive set and it seemed like a decent deal for a beginner clip person like me. The idea of adhering myself to the bike kind of freaks me out but I'll practice on the trainer and some grass until I get comfortable with them.

Oh. Did I mention trainer? 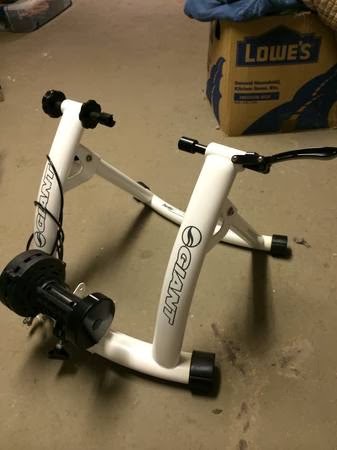 Well, triathlons get pricey but it is what it is. Found this trainer usually priced well over $300 for less than a third of the original cost on Craigslist. The lady said she really only used it once and it looked pretty brand new and immaculate. I recently joined the RTA (Ridgewood Tri Athlete) and they have a few classes a week on bikes and trainers. I'm looking forward to participating in those so felt this was a good investment.

Next on my list of tri stuff to do is to visit the bike shop sometime this week. I need to tune up and fit my bike before I'm ready to roll.

Yesterday I ran 4 miles and I rode a measly 15 minutes on a bike at the gym the other night. This week I plan on returning to some kind of training. I have a half marathon in April and I might try to find a sprint tri in May or June.

Hope your winter is going well!!

Get any new gear lately?

22 tips for doing the Whole30 Program 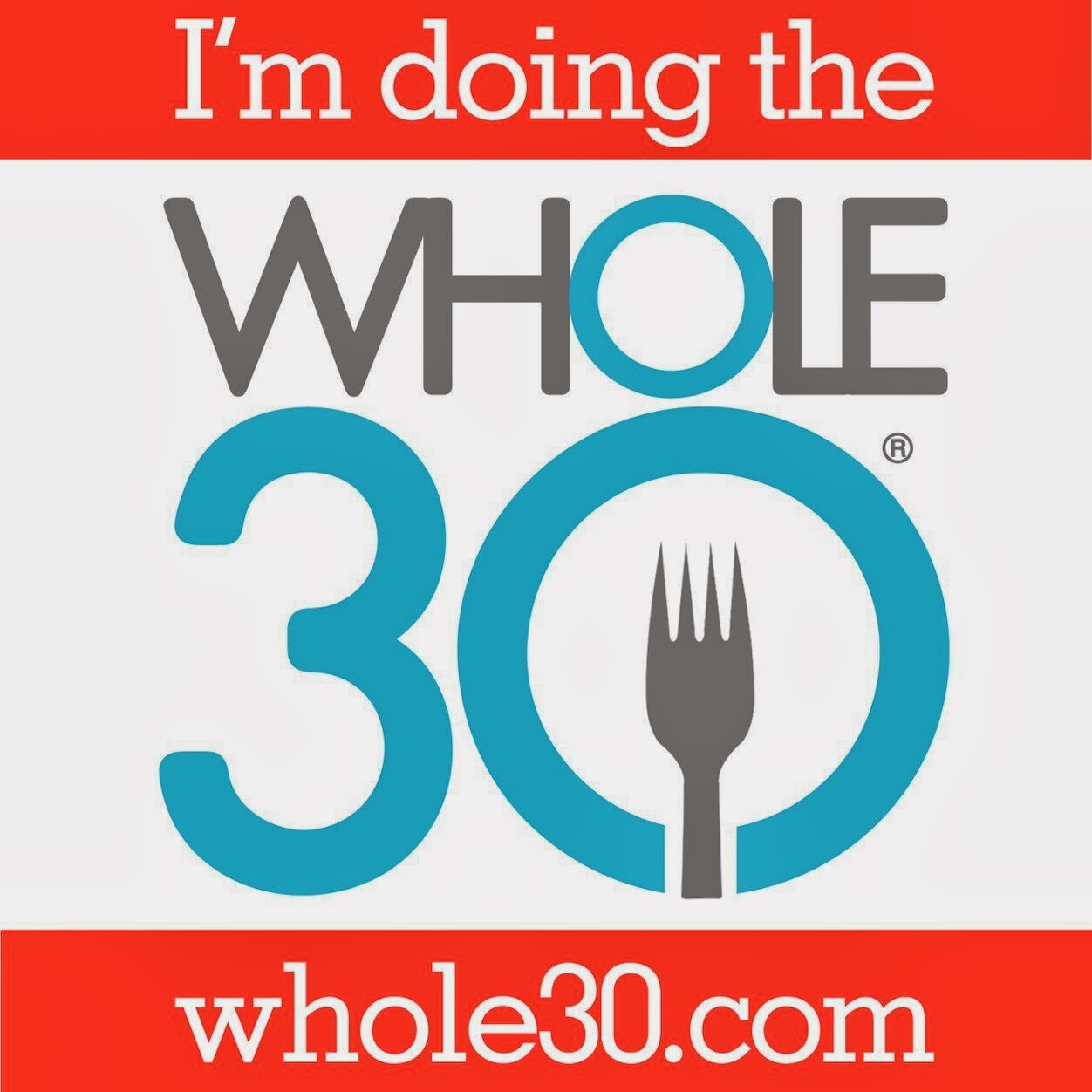 I was hit with a few interesting moments with my Whole30 journey but overall I'm proud for having made it through the program without giving in to temptation or giving up when the going got tough.

I think most of this advice can be applied to any diet modification program you might want to attempt but this is some stuff I learned along my Whole30 way!

Here are my 22 tips to helping you do the Whole30:

If you've done or are doing Whole30 what would be your tips? I've watched the Biggest Loser since season one. I know a lot of people have a lot of opinions on it - and many have been critical. I haven't really been a critic. Personally I've always found a way to be inspired and entertained by show. I think there are some good messages in there even if rapid, large weight loss is unrealistic for most. Plus I love Dolvett :)

I thought this season was OK. It took me a little while to really warm up to the players but by the end I was really rooting for Rachel. She is a bright, beautiful young woman. She has the heart of an athlete that was trapped in a body that didn't match her spirit.  She killed the sprint triathlon and week after week she worked harder than anyone else and week after week she proved her toughness, perseverance and strength on the scale.


But now it seems that same amazing drive and focused personality could be backfiring.

I'm not a doctor and perhaps her nearly 60% of her body weight drop is OK for her. Perhaps carrying a mere 105 pounds on her frame is OK. I'm not an expert but I have to say she didn't look healthy and I was alarmed and I wasn't the only one.

Twitter lit up with worry and criticism. Hell, even Jillian and Bob couldn't hide concern when Rachel appeared and check out the contestant in red behind Jillian. 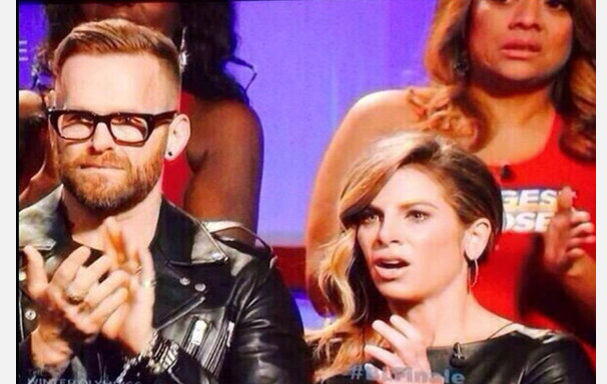 But Rachel was unaware of the shock she sent. She stood there, beaming with pride. Her hard work apparent for the world to see! She did it. She took on the challenge she was given and worked hard, stuck to her diet and literally worked her ass off. She was proud and then she was rewarded by nailing better than any of the other contestants the goal of the entire show: Biggest Loser!

My fear as someone who struggles with weight and balance is that she could potentially be developing a disorder. She's felt "punished" and felt her relationship dramatically change with her Dad when she put on the weight and now she's been encouraged and celebrated week after week for taking her weight loss to new heights. 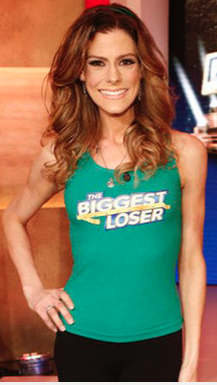 Has it all gone too far?

Maybe this is a healthy weight for her. I know plenty of very naturally slim people who would be offended by the idea that they were unhealthy just because they are uncommonly slim. Many of them can't gain weight if they try. But my gut says that for Rachel, it might have crossed over to a not so healthy place and it really isn't her fault. I can't blame her. When you live in the mind and body of a fat person it takes a long time for you to realize that you're thin. When I lost my weight I thought I went from a size 18/20 to a 12 and I was thrilled. My stylist friend thought 12 was too big for me but you couldn't tell me that. I believed that was my size - until she made me try on what I thought was a ten and it fit! Wow a ten! Only it wasn't a ten - it was a six. I was a size six / eight but my brain, despite the weight on the scale didn't register that. I am sure Rachel is not registering her size. Even the scale is deceptive for her. She is potentially living in varying states of "I can't believe I'm doing this!" Constant pats on the backs and an intense fear of letting it all slip to shit and eventually putting the weight back on. Even if someone says to her, "you're looking a little thin" she's not going to take it as concern - she's going to take it as a compliment - surely (fat her) couldn't be too thin. Especially with how fast the weight came off - her brain hasn't caught up to the body yet.  It could be dicey.

My hope is that she just got this thin for the show, to win the big prize and that her weight will normalize to what is healthy/happy for her and she'll comfortably maintain that.

My fear is that we've created a real issue. Someone who will obsessively count calories, fret over any ounce gained... Did we hand this girl an eating disorder?

By the way, Rachel wasn't the only one that flirted on the maybe too thin side. Runner-up Bobby looked like he had perhaps lost a wee too much too.

Only time will tell.

Did you see the show?


I know you guys are curious so here are some stats from my Whole30 experiment:


Weight wise I'm OK even though I had grand illusions of finishing this thing out at around 148 or 147 pounds. Oh well. Honestly I didn't get to work out as much as I would've liked to and there were other small issues like probably not drinking enough water and maybe one too many cashews on days where I felt "snacky"

While my Weight Watcher goal was 150 and my personal "happy" weight is between 145 - 148 - I'm feeling good. I've been beating myself up over my weight but I don't think anyone else thinks I look heavy and I'm healthy and feel good. So I'm continuing to work on getting over the numbers on the scale.

So far, two days post whole30, I'm still mostly eating whole30'ish. I have had a martini (OK 2) and  one or two other things 'off-plan' but I'm liking what I'm eating and how I'm feeling so I'm carrying on.