From Fat To Finish Line the documentary Nashville Premiere

So the last few weeks have been an exciting whirl-wind. I'm practically pinching myself that it all just happened.

After three years in the making, From Fat to Finish Line the documentary premiered at the Nashville Film Festival this past week.

Wow. What a trip.


It was exciting and nerve-wracking to think that the film we've labored over for years (and one that showcases one of the most difficult runs of my life) was going to be viewed by strangers on an enormous screen and in a real-live movie theater.

It started with a little more than half the team traveling to Nashville to be a part of the screening. A few of the team couldn't be there for various reasons and that was the toughest part. It made everything just slightly bitter-sweet because I kept thinking of them and wishing them there. I know that it was hard on them to not be there as well and that made me sad. We are planning on doing quite a few festivals so I'm sure that everyone will get the chance to see it on the big screen and enjoy a festival so that is the good news.

Aside from Linda who came in a little later that day and Carly who came in for the second screening later that week, the team who was there and myself decided to kick off the premiere day by running a local 5K. It was fantastic and fun. Every run should be filled with that kind of joy.


Then we had a nice post race brunch in a fun Nashville spot, relaxed for a bit and got ready for the premiere!

There was a red carpet and we got interviewed and pictures taken!

The team and Director:

We had two screenings with Q&A's afterward.

We were flying high and then Runner's World ran an online story about the premiere! How fricken cool.  You can see the article here and they even linked to the trailer.

Here's a girl with her own amazing story who wanted a picture with Carly and I after the second screening. Stuff like this makes all the hard work worth it. I was just blown away:

The plan right now is to do a festival circuit of various cities (I will let you know where and when) and then be ready to distribute for the public by January.

It leaves me speechless. Who knew that all those years ago when I decided to pick up a pair of running sneakers, and try to run for a minute and made an audacious goal of running a race that it would lead to all this stuff? God/the universe/ whatever you want to call it just works in mysterious ways. I'm so thankful and grateful for this journey.

Recently Runner's World Magazine reached out and asked if I would be interested in reviewing Dr. Metzl's new book, Running Strong. 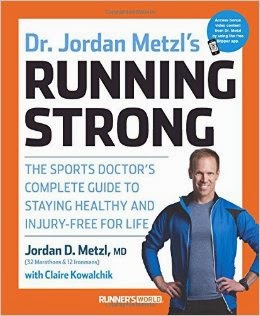 Dr. Metzl is a runner and Ironman. You know this guy "gets us." He knows the ups and downs of running, the issues we face, the health rumors we've heard and concerns we might have.

This book came to me at exactly the right time.

I have just been accepted thru lottery into the NYC Marathon (Yay!) but have begun feeling the effects of running. After long runs, my knees get a little achey, my hamstrings a little sore... you know the drill. Dr. Metzl addresses each potentially creaky part of the runner's body in a section called "Uh Oh What's That Pain?" He explains the mechanics of each body part, why the pain may be happening and how to correct it. And by the way, he does this all in a very interesting way.

Dr. Metzl recommends strength training (he has a whole slew of specific strength exercises recommended for us runners) and daily foam rolling. I've begun doing both. I know that both of those things are paramount for me but Dr. Metzl was able to give me the tools to actually do those things instead of think, "I need to do something" but not know where or how to start.

The book has a cool feature, an app. You can download an app called Blippar and when you scan certain icons in the book, the app will take you to videos shot with Dr. Metzl right in his office! These little "Blippar" opportunities are all over the book and another great way to get useful information.

Dr. Metzl covers EVERYTHING in his book and truly prepares you to run strong whether you are a beginner trying to figure out the right running shoe to a seasoned marathoner. There is tons of great information and take away. It's the kind of book you devour cover to cover the first time you get it and then keep on your shelf forever for reference.

Check the book out! It also would make a great gift to a fellow running buddy!