Sorry this blog has been so neglected lately. As mentioned in my last, 'oh crap' post things have been hectic, I've been massively overloaded and finding time to just sit and blog is a luxury that I just couldn't get to.

But with all that said -- I'm finding the time now to tell you all about last week's half marathon in Atlantic City.

I went into this one much more calm than usual. I knew I could make the distance even though I haven't run quite as much as I wanted to. I also assumed that I wouldn't be as fast as my last half because I was in the midst of full-marathon training during my last half and by the time of that half, I was racking up 15 and 16 mile long runs…

I was approaching this one as a long run + fun because it was an actual race.  Last fall I ran a half in 3hrs. During marathon training I did it in 2:24 or something. I was hoping for around 2:45.

Because it was AC and the pressure was off, I went down with my husband (first time in more than four years both of us had been away from our 4 year old son!) We had a lovely dinner and cocktails. We walked around all day and I wasn't as 'day-before' strict with food and stuff that I usually am. I was just enjoying the ride. 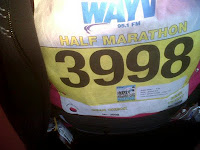 Because the race started at 8AM and our hotel was just a few blocks away, it was a nice, non-anxious morning. I woke up, got dressed and strolled to Starbucks (which was still closed!) but opened very shortly at 7AM.

The old guys of AC were very nice. Three different older gentlemen complimented me for running that day, told me I looked gorgeous and one said, "Wow you really look like a runner." I laughed and pointed to my bib saying, "well this might help."

After loading up on Starbuck's "perfect oatmeal" and a large coffee, I headed to the start line located on the boardwalk in front of Bally's. 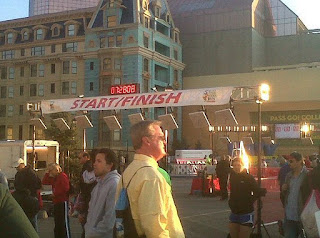 I began to eye the bibs of the full marathoners and felt immediate twinges of jealousy that I wasn't wearing the red 26.2'ers bibs. But my own yellow 13.1 had to do.

So 8AM came and went. Hello? Why isn't anyone running? Not sure why but we didn't get underway until a few minutes after. It wasn't as many racers as the Long Branch one or the RNR ones so there were no waves. I lined myself behind the 5 hr. marathon pacer person and got to running.

I felt good and happy and strong. I was just running. I wasn't paying attention to time and enjoyed the cool weather and ocean views.  It was very windy and that was a slight issue. There were moments where the gusts of wind threatened to knock me off my feet! Sand stung my eyes and when we were running head into it, it felt as though we were running in place. I let go of doing it in 2:45 and just resigned to do the best I could.

Of-course I had the obligatory potty break right before the 6 mile mark and that knocked a few minutes off.

The last few miles 8-13 I started to lose the jealousy for the full marathoners and feel a little jealousy of the 10k'ers :) It felt long enough and the last 3 miles (back on the board walk) just felt like forever.

And funny thing, it was the Atlantic City boardwalk. There was no roped off areas for runners and the rest of AC just operated 'business as usual' so as were running and sucking down Gu - there were people wandering out of casinos, buying their boardwalk junk food and smoking their cigarettes. It was a fun but bizarre racing experience.

As I was in my last mile, I heard a bunch of sirens and hoopla behind me and turned to see the guy who was to win the marathon whiz by! Crazy to me how fast that dude ran and exciting. 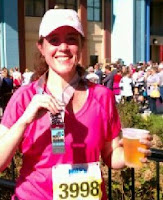 As I came down the shoot, I heard my husband call my name - he started running down the side with me and screaming, "finish strong! you look great!" That was great. He's usually not at my races because he's watching our child and there was something so fun and exciting about that. I loved it.

I finished and looked down at my Nike+ 2:26 (I did pause it for potty break) What!? That's a way better time than I expected! I think the AC official time was 2:29 half and 1:11 10K (with the potty break before both.) YAY!  That's pretty good, especially with so much wind and head wind. I was pretty darn happy.

So I got handed my victory beer, toasted my good fortune and have a fourth half marathon under my belt. (5th race if you count my full mary.) Now to start thinking about the next one…

Oh Crap - it's been too long

Sorry peeps - I've fallen off the face of the earth… I've been swamped. Taken on a full-time freelance gig and between that, running, taken care of a four year old, building the Media Meld empire and my NJ.COM blog… well….
Ya know. It's been a tough few weeks but I've been running pretty consistently and I feel good.

Been gearing up to run another half this weekend in AC and I'm excited!

I also got a few "Chi Running" books and have been reading them. Fascinating stuff. There's this whole other method of running that is supposed to help you run faster, further and with less risk of injury. I have an extra copy of the book so as soon as I read my copy, fully 'get it' and can really implement the technique, I'll be doing another book giveaway.

Hope you all have been well. I'll try to 'keep in touch' more often and will report back after AC!