I have tried to write this post since Monday but the enormity of it all has left me at a loss to where to start.

I'm overwhelmed with gratitude that I was able to do this race. 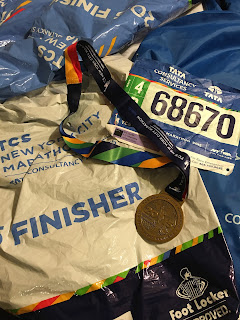 The night before the race my friends Linda and Charlie came to stay with me (read Linda's report here). This was pretty great. Linda and I have been friends for a long time and we've dreamed of doing the TCS New York marathon together for quite a few years now. A few years ago we got to run in Central Park together for a fun run and then 2 years ago we ran the "Dash to The Finish Line" 5K that takes place the day before the marathon and ends at the same finish line. During both those runs we wondered, "what would it be like to do the big one?" And lucky for us, this year we'd find out.

I woke up at 3:45 AM excited. My running hypnotherapy worked, I felt ready for this race! I got dressed, checked the weather (yes! good weather!) and we got under way. By 5AM Linda, Charlie and I hopped the buses from the Meadowlands to head out to Staten Island. I kissed my husband and son goodbye and told them that the next time I'd see them, I would be a marathoner.

We arrived at the athlete's village and the buzz in the air was awesome. Channel 7 news was set up in our village and people from around the globe were getting ready to get their "New York" on. Interestingly, I saw plenty of people catching some sleep. SLEEP!? I know we had hours to kill but I couldn't have slept if I was placed on a cloud of pillows and angels were singing lullabies in my ear! I marveled at these people who could catch a doze so close to running this epic race.

My running buddies and training partners this whole time finally arrived too! Ann, Jen and I have spent hours together doing long runs. They both were in the "Orange" village and Ann could've started earlier but we decided we wanted to run this thing together. I was excited about that. I wanted to run together too. :)

So finally it was our time to head to the corral. We head on up and wait, excitement growing by the minutes and then finally... The cannon booms and we hear Sinatra crooning his iconic, "New York, New York." I choke back tears and we get going.

The bridge was a blur and then we were in Brooklyn. Brooklyn was phenomenal and I enjoyed every minute of high-fiving kids and thanking strangers who called my name. I ran many miles trying to play "pace police" to my two running buddies, Ann and Jen who were starting off pretty fast for what our training was. I was afraid that the speed so early would burn us out. I struggled to keep up so I just did the best I could. They were having fun and I didn't want to be too much of a drag.

Around 8 miles in I spot my friend Joe Pryor! And how could I miss him - check out the sign he had for me!! This was soooooo beyond awesome I can't even tell you. I never really have spectators at races and I can't remember ever really having a sign like this. It meant the world to me that Joe and his girl Jess were out there waiting for me. It was great. I hugged him and Jess and it was just joyous. They wished me well, updated my Facebook friends and I was back on my way. 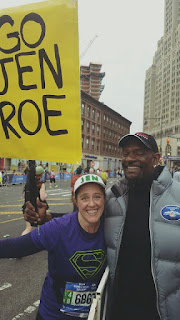 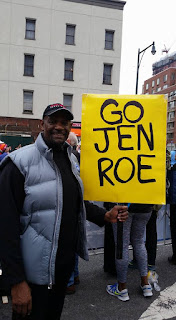 We just kept running. Queens was fun but short and soon we were going over the Queensboro bridge into Manhattan. Manhattan was great. We ran for miles. Again, I was trailing my friends for a lot of this run but managed to keep them in sight. We'd usually catch up through aide stations and then I'd fall behind again. It was a little discouraging but we had all agreed to run our own races if we wanted to so I couldn't blame them for doing their thing.

Jen wound up seeing a few friends along the course and her family came out for her as well! Her husband and parents looked so proud. It was really nice seeing them all :)

Some where along the way, I've seriously lost track of miles. I have no idea how many we were in but somewhere out there things started to get tough. I'm pretty sure it was somewhere between Harlem, the Bronx and back into NYC, the legs started to feel tight. Which is fine. It's a friggen marathon - things should be hurting after running for hour upon hour. Jen began to struggle a bit too. I think the fast pace earlier was catching up. Ann was strong and powered on we soon lost sight of her and she went to finish strong on her own.

Jen and I did a lot of walking the last miles of the race as we were running/jogging/walking/crawling up first avenue, we started to hear the police announce, "The New York City Marathon is now concluded" please move to the sidewalk - I was like, "No it's not! I'm still running!". It was now pitch dark. We were out there a long time but we kept on chugging. Jen was feeling a little bit dejected.  A jerk of a guy (liar/ahole) told us that they ran out of medals. We wondered if we would still get one. We had goals of finishing between 5:30 and 5:45 and now we were way past that. We were hurting and it was tough. I kept reminding Jen that this was a great day even though we were towards the "back of the pack", that we were doing something amazing. Personally, I wasn't concerned with time. She fretted what people who were "tracking her" might think of this time, I reminded her that if they were tracking, they weren't moving their bodies 26.2 miles like we were!! ;) I get it though. I used to worry about time too. I finally let go of that. I run because I love it. I will never win. I will never be all that fast and that's OK. I'm grateful I can move this body and celebrate running.

With the last half mile or so we turned down the final stretch - despite night-fall, people were still out there cheering (not many but some) and I felt overwhelmed with joy and emotion. I ran proudly to the finish line. We had done it. We had set a goal, put in the training, believed in the journey and moved ourselves from Staten Island to Central Park. Our Jersey Women Strong friends had volunteered for the race and were there at the finish line. They gave us our medals, heat sheets and hugs, they wiped away my 'ugly cry' tears of joy and it was spectacular to see them there.

It took me 6:55:59 seconds to do it. (that included 3 potty stops, lots of high-fives, one hug, a chat with Joe and a bunch of walking through water stations). It was a long day - almost 7 hours on our feet! That time was an hour more than I had anticipated but you know what - who cares? I loved this day. I fully embrace my "back of the pack" status. I'm so proud of the effort. I make no apologies for being slow. It's who I am. I could've gone faster, could've high-fived a few less kids, spent a few extra seconds not talking to Joe, skipped the potty, ran a little faster but for what? I enjoyed my time out there and took on the city the way I wanted to.  To quote another Sinatra song, "I did it My Way."

My heart is bursting with gratitude for having this day. It was so special. It was so hard. It was such a challenge and a mountain to climb. It's a finish line that has forever changed me and I'm a lucky girl to have experienced it.