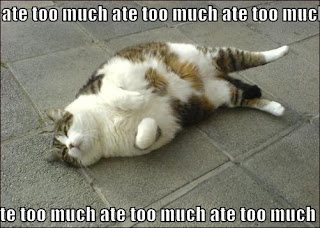 Well I ate too much at Thanksgiving which is really annoying.

I started the day off strong with a bowl of oatmeal, a cup of coffee and a 4.3 mile run around the neighborhood. GO ME!

Then, it was a scramble to shower, pack up the kid and head over the river and through the woods to Grandma's house.

Nana and Poppa (as my son calls them) live about an hour and a half away. I ate the oatmeal around 8am and that was all I ate. By the time we got to my mother's house, I was STARVING and promptly fell face first into a platter of cheese, olives, crackers and (I'm not proud) potato chips and onion dip.

Oh and what the hell… It's a holiday. Sure. I'll have a bottle glass of vino please.

I was pretty full by the time the bird flew out of the oven but Thanksgiving is my very fav holiday and there was a no retreat, no surrender thing going on internally and like a good soldier (or a very foolish, slightly sloshed and full of junky food girl), I piled on the mashed, the stuffing, the turkey and I don't even know what else… (well I do know what else but I won't bore you with the delicious ridiculous details.)

I rolled from the table (thankfully, I didn't clean my plate) but I was mad at myself for eating waaaay past the point of satisfaction which is something I've worked hard to grasp…

Well. Ya know. What can I say? I'm not proud of myself. But I learned something.  Nana and Papa are evil people who tempt me with their goods! Bastards…

Seriously, I learned that I need to never arrive at a festive affair hungry or I'm a goner.  I should've had some fruit and yogurt post-run or a half a whole grain muffin with a little peanut butter - something to keep starvation at bay and a little control in pocket.

So the bad news: This was a food fail. 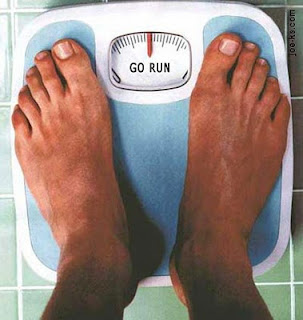 The good news: Truthfully, years past I ate all this and more without a second thought. I would of then followed this debacle with a leftover plate around 9PM at night (we eat around 2 PM in the afternoon) and would've had it for breakfast the next day.

Instead, I came home, drank a ton of water and went to bed.

I also would've never exercised (heaven forbid) on a holiday.

Got up this morning and went to a Weight Watcher meeting like it was confession, cleared my soul and started my healthy life over and followed that with a two mile run.  I stopped the bleeding and am carrying on.

For the record - I was up only .2 this week at WW and with long runs coming back and a little focus, I'll take that off by next weigh in.

So I guess it's not so bad after all.

How was your Thanksgiving?

I admire your honesty. I say turn the page. moving on. The big picture is not bad at all...that .2 wil be gone next week and more I bet. You are strong, dont forget that.

Brave woman to weigh in so close to the holiday! But now, you've got me a little scared for my own weigh in on Monday. HA!

I think it's great that you're being honest with yourself and not making excuses. And you certainly learned what to do differently next time (eat beforehand, so you're not starving). And the 0.2 gain? You can lose that in a day!

You've inspired me to get honest with myself - I need to pay more attention and work harder to get back on track!

Your Thanksgiving dinner sounds heavenly by the way - hope you had a lovely day!

Thanks for keeping it real, friend!

If you can enjoy the holiday and only have gained 0.2 lbs then you did awesome. Don't sweat the small stuff.

In the grand scheme of things this wasn't such a disaster - i can only pick up and do better next time.

It's frustrating because while I know that it's OK to indulge occasionally on a holiday it was the lack of control I felt. That's the kicker. But, all I can do is try to plan better in the future.

A good lesson I've learned is to try (hard as it is) not to let myself feel too guilty and to 'stop the bleeding' as soon as possible. I feel somewhat successful on that front.