You're Fat, It's Hopeless and Other Mean Things I've Told Myself

I know it's been a while since I've posted.

It's not that I haven't wanted to update you but I've been feeling a little (OK a LOT) discouraged. I haven't had any good news. I've been struggling to lose and felt embarrassed. What could I say to you when the scale is going the wrong way?

What could I say when all I have going through my mind is "Here we go again. You can't do this. You see. You're a fraud and failing."

So here's a little recap of how things have gone so far. BTW (this is a pretty typical pattern).

WEEK ONE: Great! Yay! I lost weight. I love this program! I rock. I'm in control. This time it's different. This time I'm going to do it. I will be at goal in no time. (Cue song: "This Girl is On Fire") 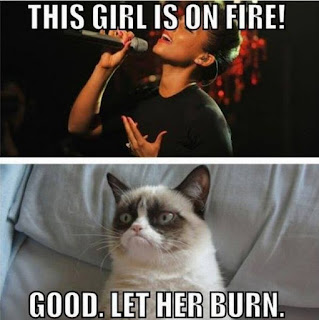 WEEK TWO: WOO HOO! I lost again. See. I am unstoppable. I got this. High fives for everyone. This is so easy! (Cue song: "All I do is Win").

WEEK THREE: What? What do you mean I gained weight? But I did everything right! I'm counting all my points and even started working out again. Oh. Yeah. Maybe I need to drink more water? Sure. Maybe my soup was too salty yesterday or the exercise did something to my muscles... retaining water. Yea. Yea.  It's gonna go back down next week. I'm annoyed but not worried. I got this. (Cue Song: "I Get Knocked Down...")

WEEK FOUR: What! How the hell... I gained again? I don't know what went wrong but apparently I suck. I mean what the F*@@? I ran five times this week, said no to pizza, chose steamed green beans instead of the loaded potato and this is how the scale repays me? F*@@ it. Why am I bothering? UGH.  OK - look, get it together... just get back on track. (Cue song: "Shake it Off")

Between week three and four I had gained close to four pounds back. I mean. Seriously. What is that?

Last week I went into week five... but somehow I don't really shake it off. I wanted to but then the negative voices returned. Every healthy choice I think "Why am I bothering?" Every not so healthy choice I think, "You see. This is why you're failing." Then starts the back slide... I start to not track as much. I begin to let some unhealthy choices creep in - all the while feeling defeated. I get angry and frustrated. I know that this is super undermining. I know that this is a really dumb thing to do. I know this but yet it happens to me and I have to break this cycle.

WEEK FIVE: I did? How's that possible? I lost a pound? But I wasn't that great this week. I ate my emotions twice. I didn't measure out or track my martini. Maybe the previous weeks of hard work caught up? Huh. Yeah, and I guess that the 75% of the time of still trying to eat right last week didn't hurt either. Um. Ok. Sure. (Cue song: "Make Me Lose My Mind")...

The unexpected pound lost this week was good'ish - I mean I fully expected to have gained at least a pound and a half back. This weight loss and the scale truly has no rhyme or reason. I guess my big lesson to learn and my greatest challenge is really getting over the scale. My husband said this morning, "Just do what you're doing. You're eating super healthy and exercising. Stay the course and throw out the scale." Maybe he's right. I don't know that I'm strong enough to throw out the scale but, no matter what, I know I have to just stay the course.

The good news is I'm still down 6.2 pounds since recommitting.

The journey to the finish line is never a straight path.

How are things with you?

I have found this article extremely useful, informative and effective. Thanks for sharing. I can very much understand the fact that there are many people who are greatly concerned about gaining extra weight and are looking for ways to shed that. I have recently come across a fat loss system called "Fat Decimator System by Wes Virgin." I have personally tried that out at once and found it to be extremely useful and effective. Therefore I would definitely recommend it to others.

Nice article! 250+ scientific experiments found there is one poison inside so-called "healthy" foods that makes you gain fat.

102,536 weight loss case studies show that cutting out this chemical melts 10 lbs off your body fat in less than 7 days.

I know it's shocking, but here's video proof that this chemical keeps you from losing fat and causes you to gain weigh in your back, belly, and arms.

Thanks for the posts!! Keep it up! Have you heard about the Cinderella Solution? It sounds too good to be true, what do you think? I think you can check it out here http://bit.ly/2KmJDvL

My name is Alecia from ca USA. I would advise anyone and everyone who needs the help of any spell caster in love marriage,finance, job promotion,lottery spell,poker spell,golf spell,Law & Court case Spells,money spell,weigh loss spell,diabetic spell,hypertensive spell,high cholesterol spell,Trouble in marriage,Barrenness(need spiritual marriage separation),good Luck, Money Spells,it's all he does or looking for breakthrough in your political career to meet this Dr Mandaker the link to his website copy this link (witch-doctor.page4.me)His email contact witchhealing@outlook.com for He is a Reliable and trustworthy man, is ready to help!

Appreciation for really being thoughtful and also for deciding on certain marvelous guides most people really want to be aware of.
Be Slim Capsule

I am a hypnotherapist for long years now, hypnosis is a safe and effective way to help you take back control and live a happier and healthy life. I am happy to see articles like this because I still continue learning and improve my skills. Here is the place where I work. https://www.apthypnotherapy.com/

Other games do similar things, but Amazon’s MMORPG is more interesting. Players can use the collected resources or buy New World Gold at IGGM.com to create items. For recent Christmas events, they also offer a 7% discount. Don't miss it!

Hello, I log on to your blog regularly. Your humorist style is awesome, keep up the good work!|